It is an alarming fact that more than 92% of the Ethiopian population still depend on traditional energy sources such as firewood, charcoal, animal dung and plant residues for cooking activities. As a consequence, associated environmental problems such as deforestation and soil erosion coupled with social and economic impacts on households have contributed to the country’s overall poor development performance. Cognizant of the severe nature of this challenge, the Ethiopian government has been working to improve access to modern energy services such as electricity in most of the big cities and rural towns all over the country. However, though considerable changes have been observed in utilizing this improved access of electricity supply for lighting end-uses, this has not been the case for cooking activities. Yet, in most urban areas, it is common to see households cooking with firewood and charcoal despite the availability of alternative cooking fuels such as electricity, LPG and kerosene. Therefore, a better understanding of the major factors that determine urban households’ cooking energy choice is crucial for informing policy makers thereby promote sustainable development. It was against this background that this research was conducted- with an objective to identify and explain the different factors influencing household cooking energy choice and transition in Mekelle city, Ethiopia. Thus, in its methodology, this study followed a mix of survey and case study research approaches with quantitative and qualitative research techniques. To collect the necessary data, survey questionnaire, interview and field observation data collection methods were employed. Moreover, 110 surveys and 10 interview samples were taken and using multi-stage cluster random sampling and purposeful non-random sampling techniques households were indentifies to fill the survey questionnaire and make the interviews respectively. After this, quantitative data were analysed using both descriptive and inferential statistical analysis methods and the qualitative data were analysed through narrations and direct quotations to support propositions found from the quantitative results and most importantly, to explain variables that are qualitative in nature. Particularly, in the descriptive analysis, mean scores, standard deviation was calculated and the data found was displayed in charts, graphs and tables and for the inferential statistics, Chi-Square test of independence was administered to test relationship between variables. Accordingly, the major interesting finding of this study was that, most households combine fuels rather than relying on a single cooking fuel and a complete shift from use of those traditional fuels was rarely observed. The main explanation for this is the existence of multidimensional factors influencing household cooking energy choice and transition. Of these, in the socio-economic dimension, household income, level of education and age of the household head were found as influential factors and in the socio-cultural dimension, household taste preferences, cooking norms and practices have also a significant influence in household cooking energy choice and transition. Similarly, cooking energy supply related factors such as limited access to electricity services, erratic supply of the fuels particularly observed in electricity and kerosene, and high upfront costs of modern stove prices for LPG and electricity influenced household cooking energy choice and transition in Mekelle city. Overall, according to the survey results, apart from the socio-economic determining factors of household cooking fuel choice, the role of socio-cultural and energy supply related factors in influencing household cooking fuel choice and transition was more evident than expected. 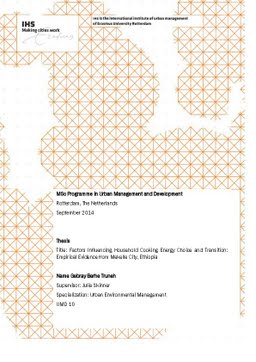