Building the future: Innovation in Project-Based Firms by entrepreneurial thinking

Companies like Facebook and Tesla Motors have shaped the anticipation that it’ll be start-ups and not established corporations, who come up with the “next big thing” to create uncontested market space and disrupt entire industries (Weiblen & Chesbrough, 2015). A number of scholars have advanced the idea that entrepreneurial ventures are likely to be the source of highly valuable and innovative ideas (Dushnitsky & Lenox, 2005). An awareness of the actions and behaviours of entrepreneurs of start-ups is critical to understand how this can lead to innovation (Chandler, DeTienne, McKelvie, & Mumford, 2011). The research of Sarvasvathy (2001,2008) advanced our understanding of the entrepreneurial process. Project-based firms, such as engineering and construction companies, are service firms that solely execute projects for clients (Blindenbach-Driessen & van den Ende, 2006). Innovations developed within business projects are typically not executed in separate Research & Development departments, but performed within, or closely related to business projects (Blindenbach-Driessen & van den Ende, 2006). Management of innovation is complicated by the discontinuous nature of project-based production in which, often, there are broken learning and feedback loops (Gann & Salter, 2000). What can project-based firms learn from successful innovation and new venture by start-up entrepreneurs? This research aims to explore how entrepreneurial thinking, like effectuation, can lead to innovation in project-based firms in the construction sector in the Netherlands. To advance our understanding of the effects of the actions and behaviours of entrepreneurs on innovation we conducted a literature study of the groundbreaking research of Sarasvathy (2001,2003,2008) and the related literature. In this literature study we also examined the barriers that must be bridged to achieve more innovation in de construction industry by evaluating the specific conditions for innovation in project-based firms. Based on the literature, review propositions have been formed and the different variables of effectuation and the effect on R&D project success in PBF have been determined. We argue that effectuation process of exploring new opportunities leads to a high level of innovativeness i.e. radical innovation and the causation process of refining existing products, services, or technologies leads, to low level of innovativeness i.e. incremental innovations. Because insight in the role of entrepreneurial thinking in project-based firms is limited, data was analysed using the multiple case study methodology. Multiple R&D projects from a population of start-ups and corporate firms of different project-based firms -with a distinct range of skills and specialism’s, like general contractors, manufacturers, specialized subcontractors and advisors- were selected. In-depth analyses and cross-case analyses were conducted to test the propositions formed during the literature review. The in-depth an analyses and cross-case analyses were based on the raw data from interviews with leading experts on innovation in project-based firms and entrepreneurs of start-ups in the construction sector and corporate publications and internet sources. The analyses lead to the following results. A mean-driven approach is the preferable process when exploiting contingencies that arose unexpectedly over time (Saravathy, 2001) whereby firms create, value, assimilate and apply new knowledge (Brettel, Mauer, Engelen, & Kupper, 2012). Goals emerge by imaging courses of action, based on given means. Similarly, who comes on board determines what can be and needs to be done. Radical innovations require new competence and innovation paths and presuppose the acquisition of new knowledge, which hasn’t been present in the company today. The acquisition of new knowledge by renewal learning, allows change to new competences and innovation paths that haven’t been travelled. Based on the case research Master Thesis | Executing Summary 4 we have found that a mean-driven innovation approach has a positive impact on the R&D project success of radical innovation projects in PBF. Affordable loss predetermines how much loss is affordable and focuses on experimenting with as many strategies as possible with the given limited means (Saravathy, 2001). Radical innovation projects consist of high level of uncertainty. Those projects typically lack reliable forecast of returns and information on market acceptance and sales volumes (Brettel, Mauer, Engelen, & Kupper, 2012). Since reliable information on the upside potential of high innovative projects is both rare and fuzzy, the upside data is usually not reliable enough to be the key decision criteria, while the acceptable downside potential -the affordable loss- is easier to estimate (Dew, Sarasathy, Read, & Wiltbank, 2009). Based on the case research we have found that an affordable loss innovation approach has a positive impact on the R&D project success of radical innovation projects in PBF. Partnerships reduce uncertainty, maintain flexibility and utilize experimentation and seek exert control over the unpredictable future, by making strategic alliances and pre-commitments (Chandler et al. 2011; Dew et al. 2009; Brettel et al. 2012). Each partner brings new opportunities that shape the coherent product, firm or market (Read, Song, & Smit, 2009). Pre-commitments are made by building partnerships and bringing stakeholders on board, even before clarifying what the innovation is going to be exactly. Pre-commitments allow firms to test the market without owning all the resources to do so (Chandler et al. 2011). Based on the case research we have found that an innovation approach directed by partnerships, has a positive impact on the R&D project success of radical innovation projects in PBF. When using acknowledging the unexpected thinking, new business ideas are launched, before worrying about who the customers are. Strategic experimentations are utilized to minimize risk and maximize learning during the R&D process. Some experiments will fail, but as long as failure informs new approaches and understanding within the constraints of affordable loss, this is to be expected and even encouraged. By learning and unlearning, exploring and experimenting and searching and selecting new radical innovations could be found. Based on the case research we have found that an innovation approach that acknowledges the unexpected has a positive impact on the R&D project success of radical innovation projects in PBF. Shortly summarized we conclude that there are different ways in which entrepreneurial thinking can lead to innovation in project-based firms. Mean-driven innovation approaches, approaches driven by partnerships, affordable loss thinking an approaches that acknowledge the unexpected all have a positive impact on the R&D project success of radical innovation project in project-based firms. 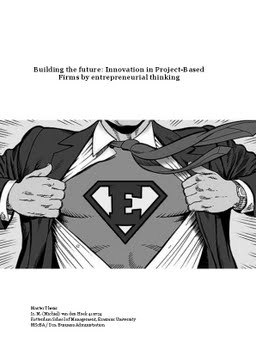