The process of globalization has been intensified across developed and developing regions to connect countries in terms of economy and other areas. Currently, Foreign Direct Investment (FDI) became important source of finance and catalyst of economic growth for countries though it can also cause crowding out domestic investments and other negative effects. The distribution of FDI is uneven where majority of FDI is concentrated at developed regions the rest goes to developing regions. The comparative share of Africa in FDI attraction is least at global level. When the possible economic benefits of FDI are considered, it can be taken as important tool for Africa’s economy. In order to fasten industrialization process in the continent, manufacturing oriented FDI is vital, helping to transform Africa’s agricultural based economy to industrialize and creating more employment opportunities than any other sectors. However, the share of manufacturing FDI in Africa could not be improved and its pace of growth could be as fasts as the service sector. Therefore, central theme of this study will be to identify determinants of manufacturing FDI inflow into Africa compared to other global countries and cities. Data for independent variable (MFDI inflow) and independent variables (location factors) is accessed from data sources fDi Market, World Economic Forum and euro monitor international. Research design and methods used to analyse these data are descriptive and explanatory. In analysing data of sampled African countries and cities, and global countries and cities statistical application tools (STATA, Gephi and Microsoft Excel) are employed to generate econometric models, charts, figures and tables of variables. Based on descriptive analysis and finding, global countries and cities performed high relatively to African countries and cities in all measures of location factors. Moreover, both global countries and cities attracted more MFDI and are major investors into Africa. The Middle East is the leading region followed by Europe to invest high capital in manufacturing sector. United Araba Emirates and Unites States are leading investors in capital and number of manufacturing projects in Africa, respectively. Half of the MFDI is concentrated at Northern Africa implying that the distribution is uneven. Countries Egypt, Nigeria and Libya are among top recipients and also most connected with global countries through MFDI. Location factors inflation, business impact rules on FDI, flexibility wage determination are shown to be significant at global countries level whereas cities MFDI inflow is found to be determined by unemployment rate, total population and consumer expenditure. Furthermore, Determinants of Foreign Direct Investment Inflow into Africa in Manufacturing Sector. 3 MFDI inflow into African countries is explained by determined such as inflation, foreign market size and working rules related FDI. Finally, total population and productivity are significant location factors for foreign investors’ intending to operate in manufacturing projects. Inflation, business impact rules on FDI, and total population are common explanatory variables both Africa and global level. The research concluded that identified determinants inflation, foreign market size, working rules related FDI, total population and productivity are vital to affect foreign investors’ decisions. Therefore, in order to increase MFDI inflow into Africa, a stable macroeconomic environment should be created addressing the prevailing high inflation record. Integrating countries economy through interaction trade is also vital, as it encourages foreign investors to export their manufactured products. In addition, incentive packages and flexible rules addressing needs of foreign investors should be implemented. Lastly, cities should exploit their growing population by means of trainings in line with labour demands of manufactures. Overall, since access to data is major the challenge at various scale, results of this research should be developed by further academic studies, subsequently, governments and investors could make informed decisions. 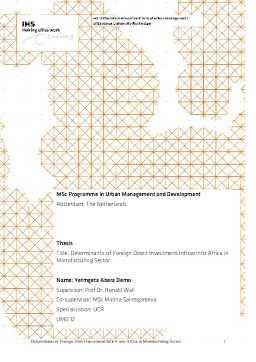