Impact of Land Use Regulation on Land Values

In Indonesia, the implementation of National Law no. 28/2009 has given local government great challenge to provide public infrastructure and also a great opportunity to find a suitable alternative for generating revenue. Land value capture policy could become an alternative for local government to generate revenue to be used for providing public service. In the condition where rapid urbanization happens, increment value of land also becomes inevitable. This increment value of land, which in many cases occurs as a result of public investment on infrastructure development and land use regulation, could be captured back to be used for financing public infrastructure. The problem is that it is sometimes difficult to separate which part of that increment is resulted from public action, and which one is resulted from the investment of either individual land owners or private developer. If the effect of public infrastructure development, especially transportation infrastructure, into land value is more or less clear, the effect of public action in term of land use regulation is still debatable. This research is then conducted to gives contribution into the debate about the impact of land use regulation into land value and to figure out the impact of land use regulation imposed within the context of Indonesian city into land value. This research used Ngaglik district as case study area. It is located in Sleman, a regency in Yogyakarta Province who has enacted a new spatial plan, called RTRW Sleman 2011-2031 in 2012. This new spatial plan put a clear distinction between urban and rural area, which gives several advantages into area designated as urban in term of intensity of social-economic activity in the future, possibility of development, and availability of public infrastructure. This regulation has the possibility to affect land value, thus making this case as an interesting example to be investigated. This research utilized primary data collection using Global Positioning System (GPS) tool and GIS Software analysis. This primary data collection method could deal with the problem of lack of official data about land transaction in the case study area. It also utilized secondary data resources from newspaper advertisement to figure out the fluctuation of land value in the case study area before and after the enactment of the new spatial plan. Finally, this research has demonstrated the usefulness of statistical modelling using Multi Linear Regression to isolate the impact of land use regulation from other factors that may determine land value in the case study area. The result shows that despite there was a significant land value uplift in the designated urban area after the enactment of RTRW Sleman 2011-2031, this uplift could not be attributed into the enactment of the new spatial plan. There might be another factor that creates this significant land value uplift in the designated urban area, such as the existence of big development that occurs in the designated urban area after the new spatial plan has been enacted. The insignificant effect might also due to the lack of consistency and stringency on the enforcement of the new spatial plan. The statistical modelling shows that public action in term of transportation infrastructure development and change land status into development land are considered as giving more significant effect on land value rather than the enactment of RTRW Sleman 2011-2031. 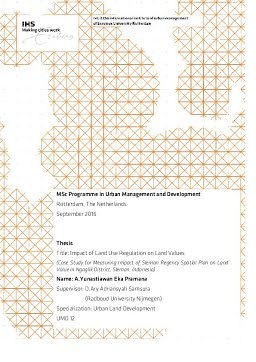