Globally, Foreign Direct Investments (FDI) is one of the essential features of the world economy and Global Economic Integration. The availability of Infrastructure is considered as one of the factors that guide the investment decision of Multinational Enterprises and these Enterprises carry out foreign Direct investment. The purpose of this research is to analyse the function of infrastructure network in determining the attractiveness of countries for greenfield FDI. The study analysed the relationship between FDI and the spatial configuration of physical infrastructure network in Africa with emphasis on the Lagos-Abidjan (L-A) Corridor in West Africa by benchmarking Europe and the North Sea Mediterranean (NS-M) corridor by means of space syntax methodology. This benchmark is necessary since West African region, where the L-A corridor is located have consistently perceived European countries and particularly EU as a guide. Firstly, the network centrality measures of the infrastructure in 40 African countries and 38 European countries were generated using GIS analysis in ARCMAP10.4.1 and space syntax analysis in UCL DepthMapX. Secondly, the network centrality measures of degree centrality (measured by connectivity); closeness centrality (measured by integration); and the betweenness centrality (measured by the choice) were obtained and used in a panel data regression using a random effect model to determine the influence of infrastructure network on the inflow of: (a) Total FDI (obtained from the FDI market of the financial times) into Africa and Europe as well as to L-A and NS-M corridors; (b) FDI inflow into four sectors in Africa namely Hitech, manufacturing, resources and services from 2006 to 2014. The findings show a strong positive significance of infrastructure network in attracting FDI in both Europe and Africa as well as in NS-M and the L-A corridor. However, variation exists based on Regional Economic Community (REC) and the rate of impact of the infrastructure network, as well as in its interaction with other location and competitiveness factors. The infrastructure network, large market size and Regional Economic Community are essential for FDI attraction in EU member states in Europe whereas FDI to non-EU member states is sensitive to macroeconomic stability, large market size, labour force and institutions. On the other hand, in Africa, infrastructure network and large market size is a determinant of FDI to Sub-Saharan Africa (SSA) whereas, in non-Sub-Saharan Africa(non-SSA), Institution and labour force are the major determinant of FDI inflow. While, in both Africa and Europe, regions with good Regional Economic community(REC) attract more FDI than regions with weak REC. Furthermore, Contrary to Europe that has bridged the gap between coastal and landlocked areas with good infrastructure and logistics services, hence, eliminating the disparity between coastal and land-locked regions, coastal regions in Africa and in SSA in particular attracts more FDI than landlocked areas and infrastructure network is significant for FDI in manufacturing, service and resource sectors in SSA with high elasticity in the manufacturing sector, however its impact and level of significance varies based on region and sub-region. Additionally, French-speaking countries in L-A corridor attract less FDI than English speaking countries. This indicates that improved and well-developed infrastructure is a vital tool for FDI attraction and cross-border trade facilitation by enhancing physical connectivity of countries and improving the investment climate in Africa and Europe as well as the two corridors respectively. The findings can be useful to Government, Policy Makers and Urban Development Administrators with respect to FDI, Regional and Global Economic Integration. This can be achieved by understanding that infrastructure network has the potential to bridge the gap between coastal regions and the hinterland. It is equally important for international development/donor agencies and countries interested in the construction of new as well as rehabilitation of existing infrastructure to understand its network effect and prioritise accordingly, since infrastructure network can serve as a development tool for both developing and emerging economies. The main novelty of this study lies in the treatment of infrastructure as a spatial network with topological dimension, using GIS and space syntax analysis; using a spatial configuration of infrastructure network measures and a non-spatial unit flow of investment (greenfield FDI) representing the spatial location of MNE’s to explain the extent of Global Economic Integration; confronting Infrastructure network with other factors, such as macroeconomic environment, institutions, market size, labour force as well as controlling for strategic location, Infrastructure networks and Foreign Direct Investment: Hard Connectivity of Lagos – Abidjan Economic Corridor v ethnolinguistic diversity and Regional Economic Community which also may play a significant role both in FDI attraction in Regional Economic Integration. 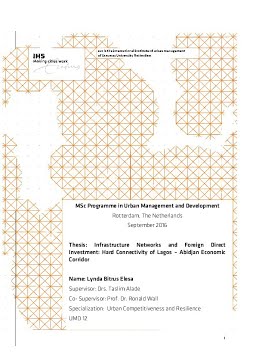