For centuries, traditional approaches for waste and storm water had as main purpose removing water from the urban environment as quickly as possible (CWAA, 2011). These initiatives, still in use, are traditional grey approaches such as pipes and conduits, which may had worked for the main goal of taking water out of streets, nevertheless, they never took into account water resources and natural environment, which lately would become the reason of their decline. In recent years, variety of strategies for tackling water issues and environmental problems across cities have been discussed and implemented across the globe, however, Green Infrastructure (GI) strategies have become lately the preferred ones for their multiple benefits and integral approach in comparison to the sectorial and Traditional Grey Infrastructure (TGI) solutions (Naumann et al. 2011; University of Wisconsin Milwaukee 2013). Recently, the city of Cali in Colombia has decided also to use GI (Environmental Corridor Cañaveralejo - ECC) as a way to tackle public issues. Unfortunately, despite GI’s financial, social and environmental benefits, developing countries like Colombia are limited to implement GI techniques due to the lack of budget, planning, municipal capacity and smart financing strategies. Therefore, the main objective of this thesis is to provide reliable information about the positive impact that GI can have on Land Values (LV), which can be used to encourage private and public stakeholders to invest in the ECC. Based on papers from Jim and Chen (2006), University of Wisconsin Milwaukee (2013), D'Acci 2014 and Noor et al. (2015), this research combines the Hedonic Pricing Model (HPM), Ordinary Least Squares (OLS) regressions and GIS analysis to calculate the actual impact of GI elements in LV across Cali at neighborhood and block scale. Then, using the resultant regression coefficients, the potential impact of the ECC in the LV adjacent to the project areas is forecasted. Analyses at neighborhood and block scales showed congruent results in the direction and significance of GI’s indicators as well as variations in the coefficient magnitudes related with the analysis scale. The results for the control variables scored similar and as expected. The block scale analysis provided more in detail results about GI, showing GI’s indicators had a high significant and positive impact. However, the unexpected positive impact that Exposure to Fluvial Flooding (EFF) had in block models turned negative after carrying a third model analysis where Contact to water bodies was controlled. The results from this third analysis showed that the positive aspects of closeness to water are more important for the LV than the chance of flooding (Barford, 2012) but that the potential of flooding does decrease the LV of blocks with comparable closeness to waterbodies. OLS results showed that when comparing GI’s regression coefficients per unit increased, number of trees have the highest impact in $COP1/m², meaning e.g. one additional tree causes a major impact in LV than adding one meter of bike line. However, the overall impact in the forecast assessment indicated that bike lines contribution is bigger since it has more presence in ECC than trees. Summing up the potential increases in LV from trees, vegetation coverage, 1 Colombian pesos (COP) Assessing the impact of Green Infrastructure on Land Values through Hedonic Pricing Model. iv pedestrian and bike lines, the average increase in the adjacent areas to the ECC is about 23%2. All these results can provide hints to stakeholders about ECC marketability and potential profit margin, incentivizing them to invest. They also provide useful insights to government for future development projects, improvements in land valuation systems and Land Value Capture (LVC) tools as well as for green spaces protection programs. In a nutshell, this thesis provides evidence of GI’s positive impact on LVs and translates it into a language that decision makers feel familiar with, such as money (de Groot et al. 2012). 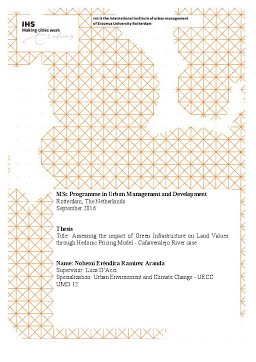