An Analysis on Governance in Watersheds The Case of Ipo Watershed, Philippines

This study seeks to understand the role of institutional arrangement, in the context of watersheds, as a tool to encourage coordination among actors. Assessing institutional arrangement and understanding how institution affects the level of coordination are instrumental in identifying appropriate strategies to address the prevailing problems in water resources management. The results are vital in developing watershed management framework, defining policies and programs implementation. This research also highlights the importance of clear, integrated and comprehensive institutional arrangement as a governance tool to encourage the culture of coordination, partnership, and accountability. The concepts that were used in this research include academic theories on institutional arrangement, governance, and coordination. Related literature revealed that institutional arrangements are instrumental in linking local, provincial, and national level of government and non-government organizations (Mattingly, 2007). Furthermore, it is viewed at a macro and formal perspective, formalized in forms of legal framework, policies and administrative arrangements (Saleth and Dinar, 2000, Mireku, Acheampong, et al., 2014). In the context of governance, the institutional arrangement is deliberated as the basis of management and governance (Montgomery, Stren, et al., 2003). It is considered as a platform to guide, specify incentives or constrainsts and install mechanisms to enhance management (Nansam-Aggrey, 2015). Organisation for Economic Cooperation and Development (OECD) highlights the importance of defined roles and responsabilities among public authorities in order to avoid fragmented policies in water resources management, unharmonized programs, and lack of wholistic performance measurements (Organisation for Economic Cooperation and Development, 2011). On the other hand, coordination is rationalized as a result of institutionalized norms, rules, and logics (Sehested and Groth, 2012, Orton and Weick, 1990). It was stated that coordination processes are more or less institutionalized governance of different government levels in a political system that came about due to their interdependence, transformative politics and selective interconnectivity. (Sehested and Groth, 2012). Through the lens of these academic literature, empirical information of Ipo Watershed was processed, analyzed and correlated. The study area was selected because of the role it plays in the provision of water supply to 13 million population of Metro Manila, Philippines. Despite its ecological importance, this watershed degraded down to 30% forest cover as of 2009. The data for this study were collected through semi-structured interview, observation, and secondary data research. Target institutions were pre-selected based on existing laws, regulations, policies and researched articles. Respondents to the interview were identified based on their position in their respective agencies and the role they play in the management of Ipo Watershed. The interviews were carried out with five (5) sectors namely: Environment, Water, Local Government Units, Indigenous Peoples and Non-Government Organization, with a total of thirteen (13) respondents. Thorough evaluation and analysis revealed that the actors have a high understanding of their roles and responsibilities in the management of Ipo Watershed. However, gaps were observed on the clear delineation of roles and responsibilities and documented processes for iii administration, planning, implementation and monitoring. Consequently, coordination among these actors resulted to None to Low ratings which means that it is “not existing” and” existing but not all-encompassing”. Although it is notable that efforts had been made to collaborate, such tend to be inconsistent and fell into a per-need-basis due to lack of clear and documented institutional arrangement. The nature of coordination among the actors in Ipo Watershed was defined by the legislations that created the agencies and/or defined their role in the management of the study area. The same goes for the level of coordination among the stakeholders. Needless to say, the quality of institutional arrangement therefore, influences how the actors coordinate with each other. 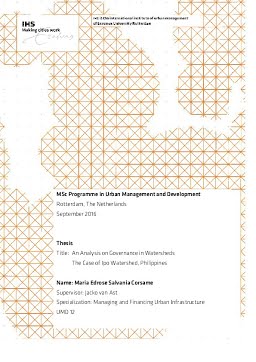