Entry in the declarant's records, future-proof or Obsolete?

Construction of a ranked shortlist of variables from a business perspective

The aim of this design science research was to identify and rank the variables that effect the decision for traders whether to implement the facility ‘Entry in the Declarant’s Records’ (EIDR) (the main research question). To achieve this goal, the variables that experts of Customs and trade distinguish concerning the use of EIDR had to be identified (sub-question 1). Subsequently, the intention was to compile a ranked shortlist that gives insight in the importance of the identified variables and the extent to which these variables contribute to the informed decision of individual traders whether to implement EIDR. Finally, it was intended to acquire insight in the importance of the identified and ranked variables and the perspectives Customs supervision, facilitation and administrative burden (sub-question 2). To reach this goal, multiple steps were taken. The research was started with a comprehensive literature study aimed at identifying possibly relevant variables from academic literature. It soon became clear that there is no scientific literature whatsoever on the question of which business economic elements play a role in the decision of a trader whether to implement a particular Customs simplification or facility. Luckily, there has been a lot of attention for the macro-economic effects of trade facilitation in academic literature. In the end, this literature study resulted in a raw longlist of over 300 variables identified in several studies to the macro-economic effect of trade facilitation. The variables of this raw longlist were roughly categorized in ten categories, compiled from different angles. Some of these were relevant while others were irrelevant to this research. Subsequently, the longlist was reduced using several elimination criteria, in order to be able to compile a shortlist of possibly relevant categories of variables from a business economic perspective. Then, the possible Customs declaration procedures and Customs supervision methods were unravelled. In unravelling these procedures, a wide range of different implementation alternatives were identified, resulting in a longlist of variables and their implementation alternatives identified from the Customs declaration procedures and Customs supervision instruments. This list was categorized, using the categories identified in the previous research step. Subsequently, this categorized list was reduced, using the elimination criteria discrimination, impact and redundancy. This process resulted in a reduced and categorized longlist of variables. In the next step, the results were submitted to Customs experts, using an unstructured questionnaire and a survey. This survey consisted of the identified variables in the previous steps. The statistical analysis of the survey results, combined with the results of the unstructured interviews, resulted in a ranked longlist. This longlist was submitted to representatives of trade. This was done once more by using an unstructured questionnaire, and a survey based on the variables of the ranked longlist, combined with the possible implementation alternatives of the variables. The statistical analysis of this survey results, combined with the results of the unstructured interviews, made it possible to compile a ranked shortlist of variables relevant for a declarant deciding whether to implement EIDR. The research resulted in the compilation of a ranked shortlist of variables relevant for a declarant deciding whether to implement EIDR, as can be seen in Table 1. As a result of the small group of interviewees (only eight), representing different players in the supply chain, the ultimate ranking cannot be seen as more than an approximation. Therefore, it is recommended to instigate further research to validate the ranked shortlists. Furthermore, it might be interesting to obtain more insight in the dividing lines between players in the supply chain. 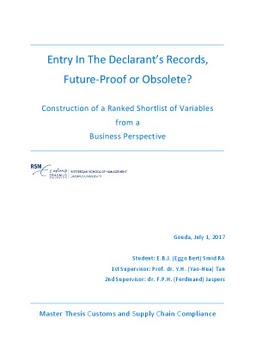