Cities are growing and rapid urbanisation increase multiple challenges, especially for developing countries. In Jakarta, Indonesia, informal settlement also grows as an impact of rapid urbanisation and lack of sufficient housing. Some of the informal settlements are located in the riverbank. However, there was a regulation that was established in 2011 about the riverbanks that should be free from any kind of buildings. This condition constitutes resettlement of the people who initially resides on the riverbank in Jakarta. The urgency for the resettlement was also driven by the threat of flooding in Jakarta. The government then planned to hold a program that can turn the function of the river in Jakarta back to normal. However, the impacted community who are displaced from their previous location usually experience drastic changes in their new settlement, which in this case, the resettlement site is in a form of rent-flat housing. Place attachment is one of many theories worth to explore to improve the resettlement process that occurs, because place attachment involves in many important processes that can make adaptation phase smoother. The main objective of this research is to explain the effect of involuntary resettlement to place attachment of the residents in rent-flat housing in Jakarta. This research will also explain the intermediate variables that influence the effect of involuntary resettlement to place attachment, namely perceived consent, predictability of the new environment, control of the impacted community in the new settlement and familiarity of the new settlement. By focusing on Jatinegara Barat rent-flat housing and Rawa Bebek rent-flat housing as the study case about rent-flat housing in Jakarta, the research could answer the research question in the context of resettlement in Jakarta based on the respondents’ experiences. The aim of this research is to understand how something happen, so the methodology used is a qualitative study, using case study as the research strategy. Case study is a strategy that examines one or several situations in real-life setting. The data collection methods used were in-depth interview, observation, mental map drawing, and secondary data, such as maps, and planning document. During the empirical study period, interviews were conducted with different respondents from both rent-flat housing, in Jatinegara Barat and in Rawa Bebek. From the interviews, it was understood that perceived consent in the resettlement process different in each individual. Control in new settlement and familiarity of the new settlement also play important role in building the place attachment in the new settlement. However, the role of predictability was not really seen for the specific cases used in this research. Besides the variables that is mentioned in the literature review, the empirical study showed findings that was not covered in the literature, which are status of ownership and the people’s feeling after the relocation. Some people feel perforce, some people feel thrown away, and their status changes from owner of a house to renting a residential unit. Based on the empirical study conducted in Jatinegara Barat rent-flat housing and Rawa Bebek rent-flat housing, it showed that involuntary resettlement gave negative impact to place attachment of the residents in their new settlement. Overall, the effect of involuntary resettlement to place attachment occurs differently for each individual, and it is what makes it interesting and important to explore more, in order to accommodate the future resettled community in adapting to their new environment. Therefore, further studies about involuntary resettlement and place attachment are encouraged, especially using different approach and different method to enrich the findings and conclusion. For practical purpose, it is The Effect of Involuntary Resettlement to Place Attachment of the Resettled Community towards the New Settlement in Rent-Flat Housing in Jakarta iv recommended to give thorough and deep socialization to the accurate impacted community that can really represent the community. It is also important to give informed consent and actually reach agreement that show the willingness of the impacted people to be relocated. In addition, conducting study about the life of the impacted community to be adopted to the resettlement planning is recommended to help the impacted community build the place attachment to the new settlement. 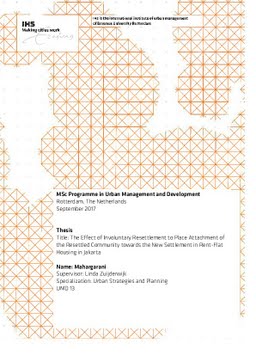