This research studies the use of the land value capture (LVC) tool Sale of Development Rights (SDR) to finance infrastructure and services that allow urban development to happen. Local governments work under pressure of tight budgets to manage the urban environment and provide needed services for citizens. In this context, LVC tools appear as an additional source of revenues still underutilized and with great potential to rebalance inequalities in urban development. LVC is the conversion of increases in land value – the unearned increment - into extra-budgetary public revenues available for investments in urban demands (Alterman, 2012; Furtado, 2012; Walters, 2016). Therefore, the main goal of this work is to explain how the way the instrument SDR is designed and operated impacts the amount of value captured from increases in value of private land to be invested in urban services. The study was made with data from Curitiba, in south Brazil. This city uses the SDR to aid financing urban services for almost three decades. It was also one of the pioneer Brazilian cities to use the instrument in the 1990s. The tool was implemented in stages and suffered several modifications, outcoming three different models of SDR currently in operation: Onerous Concession of the Right to Build (OODC), OODC sale through Shares (OODC-S), and the Certificates of Additional Potential Construction Bonds (CEPACs). Each model of SDR is used for different purposes and since 2011 they coexist embedded in the municipal land use plan, raising an opportunity and a need to evaluate its operation in converting increments into public funds. Based on a theoretical debate, a conceptual framework was elaborated to guide the empirical research made through the method of multiple case study. This methodology allowed observation of the impact of variations of the independent variable the way SDR is used in the dependent variable amount of value captured, also considering influence of context variables like culture and land markets. The time frame analyzed was between 2011 and 2016. The first investigation made was regarding the way the SDR is used, regarding what rights are charged, where they are charged, how they are charged, how much they cost, when they are charged, and what the revenues are used for. The second examination identified how much the SDR captures in relation to current and increments in value of land and generates revenues in Curitiba. Finally, the data analyzed allowed the drawing of conclusions inferring the causal relation between the studied variables. The findings exposed that the design of the calculation of the charge affects hardly the amount of LVC. Calculating the price of building rights considering current market values of land or even auctioning the rights produce higher rates of capture than using flat rates. Besides that, the relation between the amount of basic rights that is already in the bundle of rights of the developer and the possible upgrade of these rights also affects how much value of land the tool will be able to capture. The fine tuning of this relation is more important than the adoption of unique FARs when considering LVC capacity. The higher is the result of this relation, the higher is the LVC rate. Moreover, measures to guarantee full purchase of the offered additional development and a long term vision plan embedded in the tool are necessary for higher efficiency. Instruments better planned captured more than the ones used for punctual demands. Finally, the results showed that the coexistence of the many models generates internal competition between the tools impairing their capacity to capture and redistribute resources. The results also showed that the LVC mechanism of the SDR helped containing land prices’ increase in Curitiba. Areas where the instrument operates expressed fewer value increase than areas where upgrade in development is not allowed. When the obligatory payment of charges How investments in urban services can be financed by the land value capture instrument “Sale of Development Rights” – the case of Curitiba iv is known beforehand by the developer, he may pass this cost to the landowner (Muñoz Gielen, 2010, p.48, 201), converting the raises in public revenues. The conclusions of this research help understanding how the adjustments of key variables in the use of the SDR impacts the efficiency of the instrument. The Sale of Development Rights is a powerful tool to recover plus values, generate and redistribute funds, aiding finance urban development. But its operation demands a very active market associated to a careful design and implementation. Therefore it should not be used indiscriminately. Constant monitoring of the context including the land and real estate markets, political and tax payer resistance and cultural ideological debates is crucial for the operation of the SDR and promotion of a more balanced urban development. 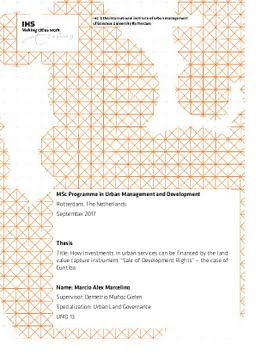