A Study of Perception from Producers’ and Road Users’ Perspectives

Prishtina is the capital city of Kosovo, the youngest country in Europe, who declared its independence in 2008. Before its independence, Kosovo is an autonomous province under Serbia, which was part of Socialist Federal Republic of Yugoslavia (SFRY). Kosovo has a long history of conflicts since the occupation of Turkish Ottoman Empire in Balkan Peninsula area until the recent one was the Kosova War in 1998 – 1999. As a post-conflict society, Prishtina is suffering from several urban challenges. One of these challenges is road safety issue indicated by increasing the number of traffic accidents in Prishtina and even nationwide. National government considered this situation as unusual for European countries. This study aimed to answer a research question on how the road safety is perceived from two main perspectives, which are road users (pedestrians and cyclists) and stakeholders in the producer’s level of road safety strategy in Prishtina. This study was conducted in urban zone of Prishtina, which is also the case study, with the regards to the increasing number of traffic accidents, which involve pedestrians and cyclists, as the vulnerable road users. Moreover, this research is driven from the importance of taking road users’ perspective, especially their everyday experiences, into account in planning, designing, and implementing a road safety strategy towards the effort to reduce the number of traffic accidents in Prishtina and in Kosovo in general. Road users’ everyday experiences are important to acknowledge in order to get a comprehensive understanding of what actually happened on the ground in term of road safety issues. This perspective, even tough is important, is often neglected by stakeholders in producer’s level, especially in the context of post-conflict society, like Kosovo, where a strategy appear to be an utopia because it does not touch the real problem. This thesis is used case study as the research strategy and rapid ethnographic assessment as the research methodology. Through a thick description as main characteristic of this study, it can be learned that road safety is perceived in almost a similar manner by road users and producers. This fact is on the contrary with academic literatures, which mentioned that road users and producers perceive road safety in various way, especially road users due to their diverse characteristics, such as age, gender, disability or handicap, companions, and education level. Findings show that young and adult pedestrians perceive road safety in slightly similar manner, except for elderly pedestrians. Both producers and road users perceive behaviour of other road users, with emphasise on car drivers’ behaviours, as the main element that influence their road safety perception. In addition, probability of traffic accident occurrences dominates how road users and producers measure road safety. However, among all similarities between road users’ and producers’ perspective upon road safety. How the road safety perception is developed highlights a difference between these two perspectives. Producers use quantitative statistic data as a basis of their road safety perception development, meanwhile social value that lives among the society serves as the foundation of road users’ road safety perception. In conclusion, this case study gives a remark that behaviours of traffic is driven from road safety perception, which depends on other road users’ behaviours on traffic. 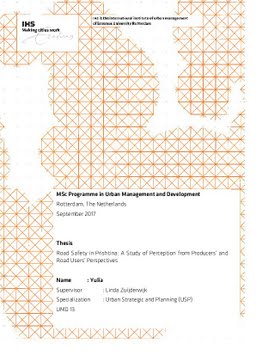