The need for better understanding of the mobility characteristics of climate-sensitive populations comes with the growing shift in the treatment of human movement not just as an inevitability driven by climate change vulnerability but as a climate adaptation strategy. This study deviates from the go-to economic factors in both adaptation and mobility, instead examines an emotional mobility driver – place attachment, or the bond of people to a place of meaning, utility and familial connection (Altman & Low 1992; Hidalgo & Hernandez 2001). Often exhibited in a person’s preference to be in or near a place of affinity and affection, the presence of place attachment is extracted and measured in this study by way of its three dimensions of symbolism (place identity), functionality (place dependence), and temporality (place rootedness) – and see if this has any influence in the mobility patterns of small urban island communities exposed to climate change. Inspired from the adaptive mobility actions set by tiny atoll communities in the Pacific, the most climate-vulnerable communities in the world yet among the most proactive climate adaptors, this study looks into the similar climate-sensitive and development-marginalized low-lying densely populated small island urban and peri-urban island communities in the Danajon Bank in central Philippines, and examines the influence of place attachment to their mobility patterns. Ultimately, this study – in seeking to determine the influence of place attachment to human mobility in the light of its recent prescription as an adaptive response to climate change – extracts for immobility tendencies in vulnerable communities which could lead to maladaptive mobility choices. The research locale is Pangan-an Island (population: 2,070, as of 2015), an urban island barangay belonging to the highly urbanized city (HUC) of Lapu-Lapu (population: 408,112, as of 2015), Cebu province, in the Philippines. Using the survey research design, the survey questionnaire was the primary quantitative data collection methodology, supported by qualitative semi-structured interviews with experts and key informants from the community. The research sought to independently determine the level of place attachment, mobility characteristics, climate change risk perception among the study sample and then test for the statistical influence of place attachment to the mobility patterns of Pangan-an residents. The cofounding impact of climate change risk perception to the two key concepts is also examined. The findings of the study reveal that the people of Pangan-an is brimming with moderately strong place attachment. Among the three place attachment dimensions, place rootedness is the strongest. Place identity was professed to be strong but was not matched with strong place care practices. Their utilitarian satisfaction to place, is found to be moderate, corresponding to the moderate level of social satisfaction. Their strong residential satisfaction despite the absence of most public utilities while an aberration is corroborated with other studies which found high satisfaction even in deprived neighborhoods. As for their mobility characteristics, they lean towards immobility, as derived from their low movement cycles, lack of desire for resettlement, as well as their low capacity for movement. Further, the immobile among their population are more attached to the place. Their place The Influence of Place Attachment to the Mobility Patterns of Urban Island Communities in the Context of Climate Change The Case of Pangan-an Island, Lapu-Lapu City, Cebu, Philippines 4 attachment – formed by strong familial roots to place, and their middling self-identification and sense of contentment towards their community – tested as a negative influence to their mobility. However, the climate change risk perception among the Pangan-an Island residents resulted in negligible effect size on both the place attachment and mobility patterns of the Pangan-an community. But despite that, plus the weak effect size of place attachment to mobility, still, these emotional and psychological traits in individuals and communities should be considered alongside the other mainstream factors in community-based climate change adaption and mitigation (CCAM) policy and actions. The Pangan-an Island residents may be deprived and underprivileged but they are well-adjusted and fairly satisfied, and have little capacity nor the desire to move – and this propensity for immobility, as revealed in this study, is also spurred by their deep affections for their close-knit island culture, people and place – these are all admirable qualities of a community setting their own course, a romantic notion of self-determination. But, in the light of increasing climate change impacts particular to low-lying small islands such as coastal erosion and inundation, deep anchorage, is cause for alarm. There are non-economic intangible psychosocial and place-based aspects in a community’s mobility choices and these factors must be weighed in and integrated into the national, local and community-based climate adaptive mobility policy, planning and action. 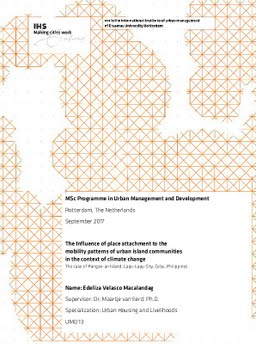