A case of plastic heroes in Amsterdam

In order to make a more effective use of resources in the Netherlands, the Dutch Government created Plastic Heroes, a national program for collection and recycling of plastic packaging that focuses on avoiding plastic to get lost in the chain (Rijksoverheid, 2016). The program differs from other plastic recycling schemes because it is financed by the packaging industry (Plastic Heroes, 2017a), which indirectly incentives the manufacturers to optimise plastic packaging as they pay taxes according to the weight of packages commercialised. In Amsterdam, Plastic Heroes was fully implemented in 2013 but after two years of operation, the seven districts of the city had different results from the project. The best results were found in Zuid, where 11% of plastic packaging was recycled, while in Zuidoost only 2%, the worst scenario among all districts (Gemeente Amsterdam, 2015). Therefore, this research intended to explain the factors that led Zuid and Zuidoost to have such different results for the same program. The research strategy used was case study, which describes and explains the problem in a real-life context, usually by combining qualitative and quantitative data. In this research, data was collected through secondary sources, observations, questionnaires and semi-structured interviews. Through the literature review, three main concepts were investigated regarding their influence in pro-environmental behaviour: psychological factors, awareness of circular economy and situational factors. Demographic characteristics such as age, gender, nationality, migration background, education level and income were also included as control variables. The psychological factors were based on the Theory of Planned Behaviour, which involves three variables: attitude towards the behaviour, subjective norm and perceived behavioural control. Awareness of circular economy was examined based on the understanding of the concept. Additionally, situational factors were analysed by the infrastructure provision and information about the program. The statistical analysis was based on independent t-tests and binary logistic regressions. The former was used to compare the means of Zuid and Zuidoost, from which the variables age, gender, migration background, income, education and understanding of circular economy were the only significant ones. The latter was useful to investigate what variables were significantly predicting recycling of plastic packaging and explaining differences between the two settlements. From all models analysed, the only variables that were found to be positively influencing in the behaviour were having Dutch background, being female and being well-informed about the program. Education was also significant, however, there was a negative relationship between having primary education and recycling plastic packaging with Plastic Heroes. Several recommendations were made addressing new ways of improving the program in the context of Zuid and Zuidoost. It was suggested for the municipality to develop new communication tools such as using social media. It could also be effective to update and improve the already existing information in the website and in the containers. Additionally, it was recommended to engage community centres in raising awareness. 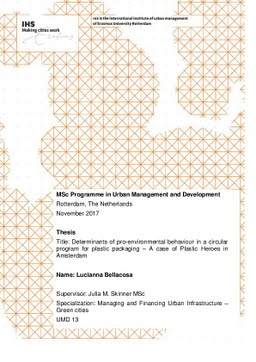