Rotterdam is one of the most multicultural cities of the Netherlands. People from 175 nationalities live in this city (City of Rotterdam, 2016). Immigrants form a substantial part of the population in Rotterdam (CBS, 2017). Within the media field, immigrants are a large consumer group (Bink, 2002; CBS, 2017; Butter and Önce, 2010). However, the media needs of immigrants can vary significantly: Because of their diverse cultural backgrounds what immigrants expect from media can differ from the expectations of local people (Anjum & Michele, 2014; Bakoy, 2006; Bink, 2002; Butter and Önce, 2010; Sun & Sinclair, 2014). Therefore, to provide appropriate media content, it is important to understand the media consumption of immigrants more deeply. Additionally, studies on media habits can help form an understanding of the dynamics of acculturation and assist with the integration process into society (Walker, 1999; Reichenberg, 2016). This thesis aims to investigate the media consumption of immigrants living in Rotterdam, to be precise, their TV viewing habits. The research question set for this study is as follows: What are the media consumption habits of immigrants in Rotterdam while watching television via cable, IP-TV, satellite and the Internet? Moreover, there are two main directions for this research. The first one seeks to understand what the devices are mainly used by immigrants living in Rotterdam to access TV content. The second direction aims to investigate what the main goals pursued by immigrants living in Rotterdam when watching Dutch TV content and TV content produced in their country of origin. In order to gather the information needed, a survey was conducted (n=570). The analysis of the data was performed by means of frequency tables. The study considered a subset of six ethnic groups living in the Rotterdam: African, Asian, Eastern European, EU, Islamic and Latin American immigrants (n=494). Each of these ethnic group includes first-, second- and third- generation immigrants. The results of this study show that the dominant means used to access TV content are laptop/ notebook/ netbook (for Asian, Eastern European and EU immigrants), cell phone/ iPhone (for Islamic and Latin American immigrants) and cable subscription (for African immigrants). Furthermore, the dominant goal of immigrants when watching TV content produced in their country of origin is obtaining news (for African, Asian, Eastern European and 3 EU immigrants) and finding a basis for conversation and social interaction (for Islamic and Latin American immigrants). Last but not least, the dominant goal for all ethnic groups considered when watching Dutch TV is obtaining news. 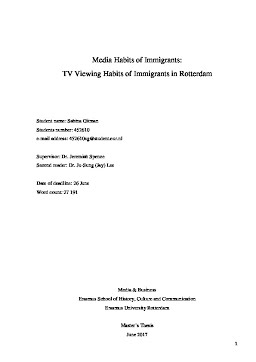