Market or hierarchy? The effect of vertical integration on performance in the freight transport industry

This thesis aims to provide a meaningful investigation of the effect of VI (VI) on performance in the freight transport industry. In theory, VI, as well as horizontal integration, provides significant advantages to firms, which seem to outweigh the disadvantages. In practice, however, the benefits of VI are less clear than the benefits of horizontal integration, which we see happening everywhere, also in the freight transport sector. In the nineties, there were quite some VI examples that failed, but in order to investigate whether today this is likely to happen again, more recent (2010-2018) data from shipping lines and freight forwarders in the Compustat Global and Compustat North America databases is used to investigate the effect. Studies that addressed comparable (quantitative) questions differ in the following ways from this study. Firstly, they lack a clear measure that captures the total degree of VI of a firm. Secondly, they are not conducted on a firm level. Thirdly, they are conducted using other measures than the one used in this thesis. In the fourth place, they are only conducted on a subsector of the transportation sector. In the fifth place, they provide descriptive statistics rather than a meaningful investigation of the existence of an effect. In the sixth place, a limited number of companies is studied. Finally, they are not up-to-date. This thesis aims to take these limitations into account. A clear measure of VI will be used, namely the ratio of value added to sales (developed by Adelman (1955)) with the adjustments proposed by Buzzell (1983) and Tucker & Wilder (1977). Performance is measured by return on assets. As said, the research will be conducted on a firm level by analysing company data from shipping lines and freight forwarders. By using recent, longitudinal data, a meaningful investigation of the existence of an effect is given. As robustness checks, two different variations on the VI measure are considered, the models are estimated for different subsamples (based on time period, data source and company type), and all models are estimated with and without two observations that had very different values for the two versions of the VI measure (to assess the effect of including these observations). The results show that in general (using the full sample), the results show mixed evidence. This finding is robust across the Compustat Global, the shipping line, and the freight forwarder sample. In the Compustat North America sample and the subperiod samples (2010-2013 and 2014-2018), no effect was found. Next to the fact that the results are in line with some other studies, that also did not find an unambiguously positive effect, several explanations are given for these partly unexpected results. A number of important conclusions emerge from the research. First, the data overall shows no evidence for a positive VI – performance relationship. Secondly, a positive effect is more plausible than a negative effect. A negative effect is not found in any model, while a positive effect is found in a number of models: the models that only used recent years (2014-2018) and one of the models using the freight forwarder sample. The former finding also supports the view that today is a better time to vertically integrate than a number of years ago. The latter finding shows that the evidence on the effect of VI on performance is mixed for freight forwarders. Implications of these findings for shipping lines, freight forwarders, policy makers and academics are discussed. Thus, although data on the last couple of years shows a positive effect of VI on performance, the existence of a positive effect is not so clear from the results of this research, which is not very well supported by existing literature. Academics should therefore try to further develop theories about disadvantages of VI or develop new ones. 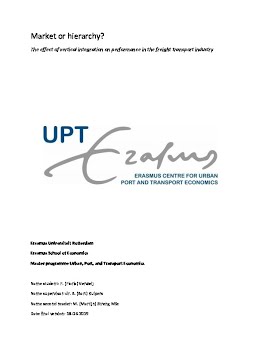