The Knit of a Nation?

This thesis examines how the globally recognised Aran sweater, something of a national symbol of Ireland, acted as a vehicle for Irishness to be communicated to the world from 1950 from 1980. The Aran sweater originated on the remote Aran Islands off of Ireland’s west coast, and, since its entry into the global marketplace, has come to occupy prominent space both in the realms of high-fashion and modern art museums, as well as in the more down-to-earth settings of knitting magazines and tourist shops. During this period, the reputation of the Aran sweater as a locally-produced, heritage garment has grappled with the varying demands and expectations of global markets, which, in order to be exploited fully, have seen different interpretations of Irishness being communicated to consumers. As such, the case of the Aran sweater has implications for how we can understand the intersection between fashion, which is in a constant state of flux, and the nation, which is notionally more static and enduring. This thesis adds to the growing body of literature on the Aran sweater, but in a more academically rigorous way than has been done before. Using Storytelling Theory, and Discourse Analysis, advertisements and publications from various fashion and photography archives and websites are examined, to reveal how Irishness was being marketed to consumers. It begins with a contextualising chapter, to establish the cultural significance of the West of Ireland, as well as the invented tradition and storytelling origins behind the sweater. From there it moves into three chapters spread across the 1950s, 60s and 70s, which have been divided by significant turning points in the developmental arc of Aran sweater marketing. It asks how early advertisements of the 1950s portrayed Irishness; how this was then affected by the mass-appeal the sweater gained in the 1960s; and lastly whether overexposure impacted the garments cachet by the 1970s. In examining advertisements from this time, one finds that the image of Ireland expressed in Aran sweater advertising was far from static – rather it developed over time. However, elements of storytelling were present throughout, and, while this may be a testament to its power as a marketing tool, it does call into question the Aran sweater’s status as an iconic symbol of Ireland, fixed in time and place. As such this thesis concludes that it may be more useful to define the Aran sweater as symbolic of the changing nature of Irishness, rather than Irishness in any monolithic sense. 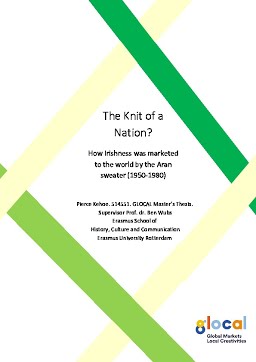