Public Spaces in a Super-diverse City

A STUDY OF STREET MARKETS IN ROTTERDAM SINCE THE 1990S

Over the last centuries, the port city of Rotterdam was fundamentally shaped by diverse migration patterns. The aim of this study was to analyse to what extent the socio-demographic developments towards superdiversity are reflected in public urban places. To this end, the migration waves and population dynamics in Rotterdam since the 1990s were examined. On the basis of existing literature and detailed analysis of statistical data, the study found that Rotterdam recorded a diversification of its population and evolved into a superdiverse city in which a new majority-minority situation is prevalent. These developments entail challenging implications such as socio-spatial segregation, gentrification and political polarisation. To outline the historical and social implications within the urban space, a specific form of public space was chosen, namely the street markets. These have been part of Rotterdam’s cityscape and the food supply of the urban population for over seven hundred years. This study understood street markets as multidimensional phenomena which reflect the urban diversity as tripartite: the vendors, visitors and products. Based on a documentary analysis of newspaper articles and reports, as well as a qualitative participant observations and semi-structured interviews, four street markets in Rotterdam were analysed. The study found that while the four neighbourhoods, in which the respective markets take place, have developed towards superdiversity, the markets themselves exhibit very different developments and characteristics. The two largest and traditional markets on the Binnenrotte and Afrikaanderplein recorded an increased diversification in its customers, but little changes of products or vendors. The two more recent and smaller ecological markets, taking place weekly on the Eendrachtsplein and the Noordplein, represent the changing consumer demands of an urban population with the financial means as well as the need for ecological and locally produced products. These developments were subsequently linked to the concepts of gentrification and glocalisation. The tripartite diversity turned out to be insufficient for this study, as it ignored the complexity of influencing factors, such as the market organisation which prevented changes on the market through its strict regulations. Furthermore, street markets were found to be places that reflect tradition and continuance in a rapidly changing and supersdiverse urban environment. This was illustrated by the prevalence of long-established and multi-generation family businesses, which reflect the epitome of traditional entrepreneurship. The study relied on theories of sociology and urbanism to highlight that street markets are places of social activities, where everyday urbanism and everyday multiculturalism can be recognised and analysed. In summary, this paper made a valuable contribution to previous research on the emerging concept of superdiversity by critically questioning its application on the historical and societal developments in the city of Rotterdam. Influenced by the increasing mobility of goods, services and people, not only the populations and cityscapes in Western Europe have changed, but also the behaviours, consumer needs and activities that people undertake. In superdiverse cities, like Rotterdam, and their everyday places, like the street markets, the opposite influences of global developments and local identities and traditions can become apparent. 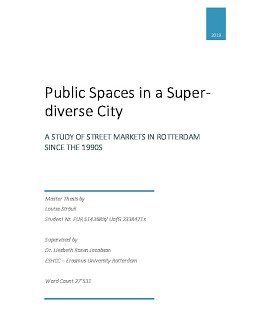