Panama 1989 Drugs, End of the Cold War and a New World Order

Forty minutes after midnight on December 20th, 1989, U.S. paratroopers descended on Panama City in Operation Just Cause, the largest airdrop in U.S. history. The reasons for the action were given to the U.S. public by President George Herbert-Walker Bush later that morning. Bush claimed the U.S. invaded, to remove Manuel Noriega, an indicted drug trafficker from power, to restore democracy, to protect U.S. Citizens living in Panama, and to protect the integrity of the Panama Canal Treaty. However, when answering what motivated the U.S. invasion of Panama, it becomes clear that Bush’s publicly defined reasons only partially explain the military action. While some of the most important documentation remains classified, after analyzing available declassified government documents, personal testimonies, and contemporary journalism, a more complete picture takes shape. Throughout the Cold War, Noriega had been an important U.S. ally, and Presidents from Nixon until Reagan, whom Bush served, actively discredited evidence of Noriega’s involvement in drug trafficking, arms dealing, and money laundering. By the late 1980s, however, as public awareness of Noriega’s illegal activities grew, and the Communist threat diminished, the relationship turned, which threated eighty-years of U.S. economic investments in Panama. On top of this, the invasion of Panama gave the U.S. military a new purpose as the Soviet menace decreased, by entering the War on Drugs, promoting democracy, and serving as the self-appointed enforcers of international justice. In sum, in Panama 1989, the U.S. military acted, at the benefit of powerful economic interests, on political pressure stemming from Bush’s personal relationship with Noriega and drugs, to create and justify the use of force in the post-Cold War international system, referred to as the New World Order. 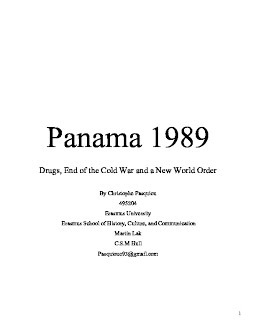