Up until the end of the twentieth century, the public service broadcasters (PSBs) owned the Dutch media landscape. It was when other broadcasters were allowed to join the market that the media landscape started to commercialize. The technological development of the internet has resulted into a globalized media landscape, allowing for international players to join the Dutch media landscape. Moreover, with the enhancement of digital transformations and media proliferation, the global media landscape has become fragmented. Besides the traditional forms of media, new media have altered the way it is consumed. Newspapers can be read online, radio has the possibility to be streamed, and television programs can be time-shifted through on-demand services. Furthermore, media services no longer just function as a source for information, education and/or entertainment. Consequently, market forces and consumer behavior are changing. Social media and other new media services have adjusted the traditional manner of media production, distribution, and consumption. In addition, businesses are becoming increasingly reliant on these new forms of media and the data they produce. As a result, businesses are becoming more data driven. With the incorporation of digital and data innovation, the media landscape got even further commercialized and personalized. Advertisements have become a key component in the experience of new media services. Moreover, with the use of smart technologies such as algorithms, advertisements have the capability to be personalized. This innovation of personalization has scattered throughout the new media landscape, provoking further digital transformations. Furthermore, some conservative companies have become bankrupt as the new media innovations were not properly incorporated. Dutch PSBs are coping with the same transitional failures due to governmental, organizational and market influences. This study investigates the forces that challenge the adaptivity of innovation by the Dutch PSBs. Consequently, the research question is stated as the following: To what extent are Dutch public service broadcasters subject to innovation failure, and how do they adapt to innovation failure due to the forces of challenges and opportunities of digital- and data -innovation within the changing media landscape? This research question is answered through qualitative research methods. The method of triangulation, including document analysis, netnography and interviews, has been based on a systematic combining research approach. Consequently, the data retrieved from documents, online observations, and interviews from three national broadcasters, the government, and the overarching PSB have been analyzed through thematic content analysis. 2 Data showed that the Dutch PSB is experiencing multiple forces of innovation failure. These forces are threatening to compromise the public value that the PSB aims to preserve. To remain relevant in the current media landscape, the PSB needs to fight the market forces and incorporate certain new media services. Nevertheless, governmental and organizational forces are often withholding the PSB to innovate. Consequently, the Dutch PSB is trapped in a failing market. However, data has also shown that the characteristics of the failing market also create possibilities for the PSB to find their new relevance in the landscape. Nonetheless, the quest for survival in the changing media landscape due to the rapid data and digital innovations have led to the determinism of innovation. 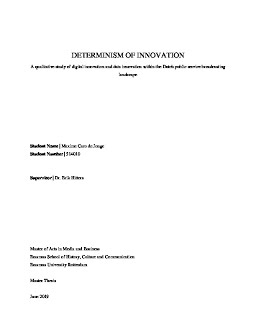