In the past years, Teesing’s customers have become more demanding and they ask for higher quality and a better delivery performance. Therefore, supplier events are initiated by important customers to align performance in their supply chains and long-term supply agreements are signed with stakeholders. Operational performance figures are shared within the supply chain and effort is put into steps for improvement by the parties involved. Teesing, the focal company in this study, maintains relationships with more than 160 suppliers, on which it depends to satisfy its customers. From this supply base, 25 suppliers were responsible for 95% of the value spent on direct purchases in 2018. Following the experience of the buyers, not all the top-25 suppliers satisfy the needs of the buying company equally. Some of the suppliers actively contribute to improvements and they quickly adapt to the newly emerged requirements in the supply chain. Other suppliers struggle to meet new requirements from the market and seem to be stuck in the past. The first exploration within the environment of the buying company reveals that an important driver for a buyer’s satisfaction is the relationship that is maintained with suppliers. Suppliers with whom Teesing maintains good communication, long-term relationships and where a certain degree of dependence is present, structurally perform better according to the stakeholders involved. This study aims to identify relational enablers and hinderers for the buyer and the suppliers, within the context of Teesing as a wholesaler and the buying company. Following extant literature about buyer-supplier relations, the Relational View (Dyer & Singh, 1998) suggests that critical resources span firms boundaries, which has advantages compared to maintaining an arm’s length relation with suppliers. The Relational View could bring above normal returns and sustained competitive advantage which is derived from inter-firm relations, and by cooperation. This requires the presence of trust, commitment and good communication. These aspects cannot easily be copied or replaced and need relational investment from the firms involved over a prolonged period of time. This study aims to identify relational enablers and hinderers by the using the lens of the Relational View. The top-25 suppliers of the focal company are put in order for good and poor performance by the responsible buyers. Then, for a selection of the good and poor assessed performers, interviews are conducted with the people involved in the relationships. Additionally, data from Teesing’s ERP system is analyzed for the actual performance that is achieved by that suppliers. MARK BRONSWIJK|488228|PAGE 4 The results reveal that the performance as measured from the ERP data does not support the supplier-ranking as done by the buyers. The good and poor performers are not very different when they are compared for return shipments, complaints and an on-time delivery. From the interviews, the presence of relational aspects as trust, commitment, communication and psychological safety emerge as the main factors that the buyers rely on for their ranking of suppliers. For the good performers, trust, commitment, communication and psychological safety were found to be present and appreciated by both the buyer and the supplier. The poor performing suppliers are found to be reluctant and sometimes even unwilling in sharing information about how they assess the relationship. From the information that they did share, a lack of commitment from the buyer and poor communication emerged, combined with an experienced presence of uncertainty by the suppliers. Their buyers find that relationship to lack trust, commitment, communication and psychological safety. The findings from the interviews are supported by the analysis of the contracts between the buyer and the suppliers. Contracts with suppliers that show good performance are low in detail and they leave room for discussion and interpretation. For suppliers assessed as poor performers the contracts are explicit and describe a need to obtain specific information. The findings of this study can be helpful for the focal company to maintain and foster the relationship with the good performance suppliers in the future, by using the knowledge about relational enablers in the dyad. For the poor performing suppliers, being aware of relational hinderers is useful for the buyers. They can support to improve relational satisfaction in the dyad for the future. 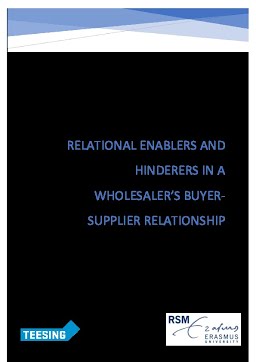