The emergence of the online platform economy has been a global phenomenon that has caught attention across the world. In Nepal too, platform-based economy, including ride-sharing platforms such as Pathao and Tootle, has rapidly gained popularity among riders and customers. These ride-sharing platforms claimed to have emerged as a solution to the poor public transportation structure in the valley. While similar ride-sharing platforms at the global level, however, have also generated serious concerns, there are no studies so far in Nepal on such platforms, and therefore, such issues have also not been studied yet. This study, thus, aims to understand the two ride-sharing platforms of the Kathmandu valley – Pathao and Tootle, and explore their emergence, the local, global and social dynamics associated with them and how they (re)shape the dynamics of class and gender. This study used a mobile ethnographic approach by employing participant observation in covert and overt way to collect data from an account of digital and actual dimension of the platform. In-depth interviews were conducted with 8 riders and 9 customers, informal interview conducted with 12 riders and 9 customers. Additionally, data from various secondary sources (such as vlog, social media, news article, blogs) were triangulated. An autoethnography was, then, used to analyse and write the report. This research followed the ethics of ‘do no harm’ and ‘confidentiality’. Even though the emergence of Pathao and Tootle is due to the poor public transportation that was even more penetrated by the economic blockade in the post-earthquake period, their sole motive was to make profit. These platforms seem to have adopted the global features of platforms, i.e. immunity, control and superfluity, through strategies such as algorithmic management, they failed to acknowledge the socio-economic contexts of the riders. These local-global dynamics, therefore, seem to have created a resistance mechanism among riders resulting them now using these platforms to build and expand their own informal network of customers to sustain their mobile livelihood. These platforms were found to inherit, in their digital dimension, the societal perceptions of gender by for example, letting the rider to choose customer based on their gender through the application and class by for example perceiving riders are only from lower-middle class and hence, designing mobile application on Android only and while, for customers designing application on iOS also, considering they are also from upper-middle class. The platforms were also found to be doing gender and class in actual practice of ride-sharing by for example, concerning gender, female customers still conscious about being stigmatized for seen with different male riders manifesting traditional gender norms. Regarding class customers treated riders rudely assuming that they belong to lower class. This study overall, sheds light on the unique aspect of platforms economy by studying the social identities (gender and class) and its influence on the relationship between rider and customers. And these aspects were studied in a mobile fashion participating covertly and overtly. Which brings the interesting findings such as class comes out stronger than the gender when the monetary transaction takes place. However, gender still comes strongly when it comes to dichotomizing the spheres for male and female. 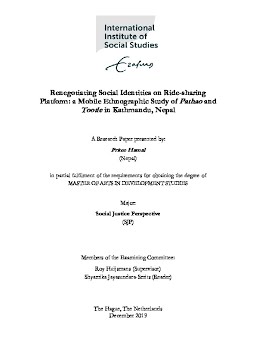