Water Governance under Occupation: A Contemporary Analysis of the Water Insecurities of Palestinians in the Jordan Valley, West Bank

The West Bank, derived from its position on the western bank of the Jordan River, is the territory that came under Jordanian rule after the 1948 Arab-Israeli war and that has been occupied by Israel since the Six-Day War of 1967. Since this period, access to water in the West Bank has been largely controlled by Israel, with the consequence of severe water inse-curities for Palestinians in sensitive areas like the Jordan Valley. This study, based on quali-tative interviews conducted in July 2019, analyses how the infrastructure and power relations surrounding water governance have affected water security in the daily lives of Palestinians. It shows that while there are variations with regard to water access in the region, overall Palestinians in the Jordan Valley have serious difficulties in accessing acceptable quantities of water. In addition, they also experience water insecurities in terms of quality, distance and collection time, price and affordability, availability and reliability as well as safety. These water insecurities have had negative impacts on the physical, social and psychological well-being of Palestinians who are facing them. They affect women and girls to an even larger extent due to their productive and reproductive roles, that necessitate access to water (e.g., agricultural work, cleaning, cooking, bathing children) as well as due to their higher physiological water needs in comparison to men and boys, which are partly determined by social norms (e.g., wearing long hair and long clothes). The main obstacle to achieving water security for these people is the political context of the occupation with Israel having hegemonic control over transboundary water resources in terms of material, bargaining and ideational power. This is exemplified in the allocations of water resources and the management of water-related infrastructure according to the Oslo II Ac-cord, that disadvantages the Palestinian side. The situation has further been worsened by the fragmented division of tasks related to the planning, regulation and distribution of water resources among the numerous Palestinian water sector actors, with women being rarely included in governance. Palestinians in the area have responded to shortcomings in terms of access to water with an array of flexible and adaptable strategies, such as storing water in tanks or reducing do-mestic water consumption. These strategies, also referred to as strategies of resilient re-sistance, as they show elements of both adaptation and resistance to the experienced condi-tions, are used on a daily basis, often in a combined manner, to improve water access. They are motivated by the connection between Palestinians and the land, which they believe should be protected from Israelis, as well as their lifestyles as farmers and herders. Refusing to submit to the control and ideology of the occupation, Palestinians also adopt the ideolog-ical and political strategy of ‘sumud’ (steadfastness) to continue with life despite the difficul-ties and insecurities they are facing. 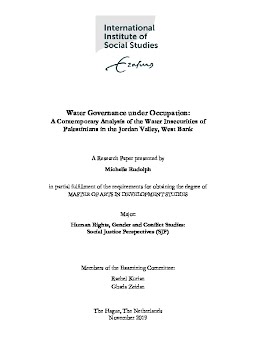