The impacts of the Livelihoods Empowerment Against Poverty Program (LEAP) in the Ajumako-Enyan Essiam district of Ghana: From (2015-2019)

The paper has examined extent to which LEAP has improved the livelihoods of the poor and helping them in moving out of poverty within the Ajumako- Enyan Essiam district in the central region of Ghana. Cash transfer programs became popular mostly within Latin-American countries, such as, Brazil, Mexico etc in the 1990s. Cash transfers as social assistance programs have been seen to make impacts in the livelihoods of extreme-poor populations within countries in Latin-America, as well as some other countries including African countries, such as, Ghana. Ghana’s cash transfer introduced in 2008, have been reported to have had some impacts on the poor beneficiary’s livelihood, food, clothing, shelter, human capital, health etc since its inception. The results from this study have shown that, LEAP has had some impacts on the livelihoods of beneficiaries, particularly basic needs, including, food, clothing shelter etc within the Ajumako-Enyan Essiam district, however the impacts have been minimal due to the numerous challenges that affects the program. The challenges have included: the low amount of money that is given to beneficiaries, irregular-payments of the grant, inadequate complementary-services, such as, community schools, healthcare-centres etc within the communities. The service-fees and user-fees such as, laboratory fees, exam fees, stationery fees etc that are still charged by public community healthcare-centres and community schools respectively, as well low staff capacity of LEAP, have made the impacts of the program minimal, and as such, have not been successful in meeting its targets of reducing poverty. LEAP have also not helped beneficiaries to engage in sustainable economic-ventures that could enhance and sustain their livelihoods. Therefore, for social assistance, such as, LEAP to become effective in eradicating poverty; and not just as a means to contain poverty, it becomes important for the government and major stakeholders to employ measures in increasing the amount of the grant to meet the living standards, ensure regular-payments of the grant, provide complementary-services, such as, community schools, healthcare-centres etc especially in deprived communities across the country. 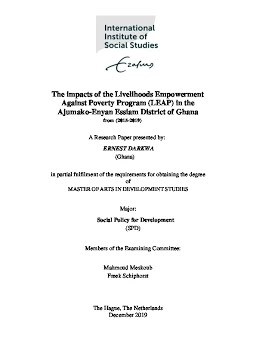