Background Recently, the ALCYONE trial has demonstrated that progression-free survival (PFS) can be improved if daratumumab (D) is added to the induction scheme consisting of melphalan, prednisone and bortezomib (MPV) in multiple myeloma (MM) patients over 70 years. Although this scheme comes with an unprecedented improvement in PFS, costs concerned with the treatment of MM are expected to increase simultaneously. Currently, in the Netherlands daratumumab is only reimbursed as monotherapy in refractory MM. It is pivotal to assess the cost-effectiveness of the new MPVD treatment scheme, in order to inform decision making with respect to reimbursement of first-line daratumumab.

Methods A four-state partitioned survival model was developed to calculate whether MPVD is costeffective compared to MPV by means of a cost-utility analysis. Costs and effects were calculated from a Dutch societal perspective over a lifetime horizon, with effects being expressed in quality-adjusted life years (QALYs). Based on all costs and effects, a base case incremental cost-effectiveness ratio (ICER) was calculated. To assess sensitivity of this ICER to alternative scenarios and variation in parameter input, deterministic (DSA) and probabilistic sensitivity analyses (PSA) were performed, respectively. ICERs were compared to the societal willingness-to-pay threshold (WTPT) of €80,000 per QALY gained. A value-of-information (VOI) analysis was performed to explore the maximum amount society should be willing to pay for additional research to reduce decision uncertainty. This is expressed as the population expected value of perfect information (PEVPI).

Results Estimated mean survival in the MPVD arm was 5.75 QALYs, as compared to 5.16 QALYs in the MPV arm. Total costs amounted to €1,477,394 and €1,241,478, respectively. Drug-related costs amounted to €688,454 in the MPVD arm, and €366,357 in the MPV arm. The base case ICER was €400,906 per QALY gained. DSAs showed that the base case ICER is robust, yet particularly sensitive to variation in health state utilities and the price of daratumumab. The PSA yielded a probabilistic ICER of €418,928 per QALY gained (11% of simulations below usual WTPT) and showed that MPVD is not cost-effective with 89% certainty at the usual WTPT. The PEVPI amounted to €6,635,543 for a number of 176 patients annually affected by the decision over an effective decision life time of 5 years.

Conclusions The MPVD scheme is not cost-effective at the usual Dutch WTP threshold. Based on this, it is recommended not to reimburse daratumumab within the first-line MPV scheme. Especially extrapolated survival was associated with a large degree of uncertainty. Improved maturity of survival data is essential to decrease uncertainty. Additional data on survival and consequent treatment schemes are currently being collected. Results from the present analysis should be revisited as soon as these data have been made available and shifts in treatment practices for advanced myeloma have acted out. 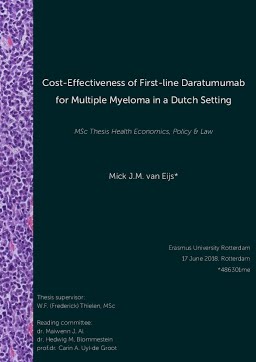