Social Vulnerability to Extreme Water Events and the Outcomes of Resettlement

A Case Study on the Women in Kannagi Nagar, Chennai

Twenty one cities across India are expected to run out of water by 2020. Chennai, the southern metropolitan city, was a little early to the party this year. ‘Day- Zero’ was officially announced, meaning that as of June 19, 2019, the reservoirs that supplied water to more than 7 million people had run dry. Simultaneously, in the northern, eastern and western parts of India over 1600 people lost their lives and more than a million were severely affected and displaced between the months of June and October 2019. The neighbouring state of Karnataka being one of the most severely affected. Not so long ago, Chennai too was the recipient of a calamitous flood that was a result of both hydrological and man-made triggers. Flooding and drought, two disasters at the end of the same spectrum. One is an event involving an abundance of water and the other revolves around scarcity. Even though this thesis deals with two distinctly and drastically different hydrological disasters, the common ground they share is the recipient of their impacts. Given the rapid rate of urbanization in combination with these calamities, especially in the cities of the Global South, it is evident that displacement and resettlement of large populations is inevitable- scattering, unsettling and ruining livelihoods. In milieu of the now irreversible impacts of the global climate crisis, identification of the vulnerable becomes crucial and urgent. In order to assess and prioritize mitigation and adaptation actions, the most vulnerable need to be identified, aided, and most importantly, empowered if we are to prepare for the “Untold Suffering” that we are headed for, as at least 11,000 scientists have now endorsed. This thesis, chose to look at a marginalized section of citizens in Kannagi Nagar, Chennai. People who were once inhabitants of the voids of the city. Pushed to the periphery by river-restoration and development projects, as well as the Tsunami of 2004 and the unprecedented flood of 2015. More than 15,000 dwellings, situated on a low-lying marshland deemed unfit for inhabitation and construction, became the basis for the Gynocentric Social Vulnerability Framework for displaced populations and Resettlement sites formulated in this thesis. The focus of the framework on women is founded on the established and scientifically endorsed fact that women are more vulnerable, not just in the spheres of disaster management and climate change, but also by resettlement and DIDR literature. Bridging the gaps in urban resettlement literature and the gendered experiential differences in socio-economic vulnerability to climate change was the objective of this thesis. The research revealed that what makes these settlements and their populations vulnerable is their positioning and location in undesirable areas; the unavailability of employment and services; compounded by the lack of foresight and planning in the construction of these colonies; in addition to the neglect of their physical and mental health outcomes of displacement. The women inhabitants of Kannagi Nagar see themselves as more prone to be socially vulnerable to the negative effects of drought than flooding. The outcomes of resettlement listed previously significantly influenced this vulnerability. Additionally, it was demonstrated that their inherent vulnerabilities that come with household and child rearing responsibilities significantly contributed to the strength of this relationship. This implied that demographically different women would display varied levels of vulnerability. This aspect was also explored and validated; showing that the woman’s role in society and the household makes a significant difference to her resilience and vulnerability. The people, particularly the women, of Kannagi Nagar are caught in a feedback loop of the outcomes of resettlement and their vulnerabilities to flood and drought. This is further exacerbated by the stigma associated with these communities. Recommendations for climate adaptation and mitigation pathways, housing policy and construction of future tenements, as well as for further research, have been made. To conclude, in the words of Keller and Wilson, we “ought to recognize the importance of maintaining, intact, communities without broken windows”. 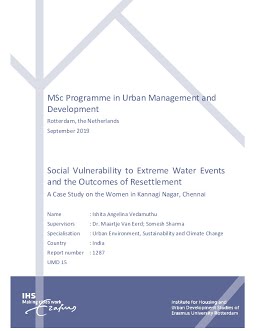