The collective consequences of climate change and unplanned urban expansion have elevated the risk of flooding in cities. Furthermore, flooding has created a substantial number of problems for urban communities around the world. It is possible to address urban hazards like flooding through implementing a set of Natural tools, and Nature-Based Solutions (NBS) are at the center of a debate that can be applied to lessen the threat of flooding in city areas. The aspects of NBS implementation are found to be less investigated by the researchers and this has propelled the current research to focus on the implementation challenges. The central objective of this study is to assess the limitations and challenges that affect the implementation level of NBS for flood reduction in Rotterdam. Moreover, there was also an endeavor to explore the co-benefits provided by the NBS projects. For conducting this study, two NBS projects are chosen i.e. Water Square and ZOHO Raingarden, both of them are located in the Agniesebuurt neighborhood of Rotterdam. This research has been conducted applying the ‘Case Study’ strategy and primary data were collected through 8 Key Informant Interviews (purposively selected) on the experts who have worked in those projects and 100 questionnaire survey (randomly selected) on the users of the chosen projects. This study has brought to the light that a number of challenges were faced in different implementation stages of Water Square and Raingarden. It is found that there were challenges of integrating stakeholders’ expectation, an uncertainty of gaining benefits from the projects, unfamiliarity of people with the NBS. Moreover, many technical problems were faced in the implementation stages which have also created some afterward impacts. Likewise, the study has also explored that both projects did not keep any fixed budget for the maintenance phase, which has raised the question of their future effectiveness. Even Water Square is found to have no proper maintenance strategy at present which has resulted in the loss of its aesthetic appeal to the people. On the other hand, Raingarden has confronted some more challenges like less involvement of stakeholders in the implementation phase and getting less priority from the authority considering its very localized impact. Moreover, this project has created a possibility of future negative impact like the spread of mosquito and it possesses some design limitations (like less sitting space inside the garden) as expressed by many respondents of this study. While looking for co-benefits, different advantages were identified from both projects. Relaxation, community gathering, good environment, aesthetic beauty are some common benefits from both projects. Again, Water Square provides facilities like sports and recreation for the people of different ages and is being used as a children’s playground. Nevertheless, Raingarden has created a green environment within the neighborhood that is also somehow ensuring ecological benefits. The most notable issue unveiled by this study is that these NBS projects have not only faced challenges during the implementation but also confronting many problems after the completion of the projects. More specifically, there is still absence of workable monitoring strategy which is also affecting the success rate of these projects. The analysis of this research has exposed that implementation challenges and limitations of both projects have affected their performance levels and execution. A significant number of challenges has affected the implementation level of Raingarden and many of the experts have considered the project as ‘successfully Implemented with Some Limitations’. Contrarily, due to the smaller number of challenges and a higher number of benefits, Water Square can be termed as a ‘successfully Implemented’ project. In addition, many experts have claimed the Water Square to be very successful due to its unique feature, design and participation of a substantial number of stakeholders in its application process. Therefore, it is understood that the more the prevalence of problems in an NBS project, the less successful it is. This study suggests that the authority should introduce effective maintenance strategies for both projects in order to make them as showcases for the people to raise awareness about Nature-Based Solutions. Keywords: Nature-Based Solutions, Challenges, Implementation, Flood Reduction, Rotterdam 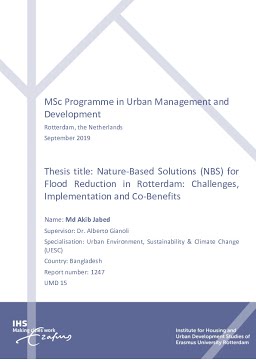