“It's a great product, but maybe I'm not the target user”: Media strategy and identity perception of short video industry practitioners

Nowadays, short video has become one of the most popular media forms, both in China and around the world, with more and more users, especially teenagers, using short videos to record and show themselves, socialize with others or gain knowledge. In addition to the video-based media form and relatively short media duration, the most prominent feature of short video applications is the platform-based design mechanism and algorithm-based recommendation content distribution mode. Short video applications have gained increasing success and popularity, but also aroused a lot of controversies and discussions, such as the addiction use and the echo chamber effect by algorithm recommendation mechanism, as well as criticisms of vulgar and exaggerated content, and controversies related to personal information collection and data privacy. Douyin / TikTok is one of the most iconic companies and products in the short video industry. As an emerging and thriving technology company from China, it is now a global success, with nearly 100,000 employees around the world. The study focuses on the group of people who work in Douyin, when they are using their own company’s application, they are not only prosumers, but also the creators and designers of the mechanisms, cultures and rules of the product. Through semi-structured in-depth interviews with 15 practitioners who have experience working in Douyin, and based on thematic analysis of the interviews, this study explores the media usage habits of short video practitioners, their perceptions of the mechanisms and controversies of the product and industry, as well as their own identity perceptions and negotiations. The study aims to provide more inside-industry voices on the study of short video from the practitioners' perspective. The study results show that, overall, Douyin employees, as professional practitioners in the short video industry, are actually not heavy users of short video nor social media lovers, and they have clear motivations and high demands for information access and consumption. From terms of technical perspective and social value, they have a relatively positive evaluation of Douyin and the industry, admit some controversies, but believe that the problems are exaggerated, and many of the controversies are common industry issues, and closely related to users' personal habits and preferences, but they are generally pessimistic about data and privacy issues. When it comes to identity coordination and recognition in their work, they generally expressed a sense of powerlessness, and they put platform data-driven requirements as the first priority, but their personal preference and creativity have a very limited influence in their work. In general, for professional practitioners of short video industry, there is a clear separation and gap between their work content and personal media habits, which affects their attitudes and cognition of platform mechanisms and controversies. Platformization, as an important feature of short video products, has a huge impact on both the production and consumption of content, has also become the reason for attribution in various controversies, while influencing professional practitioners' perception and evaluation of their work and identity from the inside. 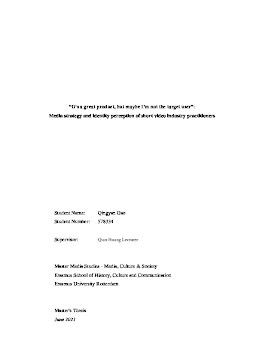