The cultural production is discussed with the notion of creativity. Collective view of creativity suggests that culture is created with collective creativity, meaning it accumulates over time. Creation is based on reproduction and interpretation, and not the abilities of one individual genius. It is suggested that the agents use act of creation as connect, communicate and cope together. With the digitization, both the tools of creation and distribution got easier, hence, the cultural production is stopped being a privilege of a group of people and become a daily activity for regular individuals, like memes, which are based on replicable templates of content, which the users can manipulate within their context. European Union Copyright Directive in Digital Single Marker, or EUCD for short, is created to stop the use of copyrighted content being replicated and redistributed. It suggests the stricter regulation in the digital platforms regarding the unauthorized use and uploads, goes as far as suggesting a stricter automated filter than the platforms already have. The regulation holds the said platforms directly responsible for any infringement, instead of the user. This is perceived as a threat for the digital creativity and the meme culture, as it is heavily based on the reproduction of snippets, hence is named “The Meme Ban”. This regulation is highly criticized due to the lack of trust in the automated filters, the lack of unification of enforcement in member states, and hence a possible fear of it might hinder artistic production and user-generated content. This research is conducted to critically analyze the ongoing discussions regarding EUCD’s weaknesses and the prospected implications. 24 articles of 1000 words are collected from worldrenowned online newspapers and magazines. They are analyzed by the recruitment of Grounded Theory Approach, which allows the researcher an analysis that holds both inductive and deductive properties, and essentially a well-rounded research. The articles are open coded into 576 open codes, 26 axial codes, and 4 tentative selective codes. The analysis has helped identifying which stakeholders are supporting and which stakeholders are opposing the regulation. Lawmakers, traditional rights holders, and traditional platforms are found to be supporting, whereas digital rights holders, digital platforms and media produsers oppose. Organizations, creatives and experts tend to diversify in the stance, depending on which side they have closer relationships with. It had also shown that the regulation is going to have some unintended consequences, not only within the Europe but also for the rest of the world, but they will be not as severe as the opposing side argues to be. Digital creativity will be affected, indeed, not in terms of the number of creation but in terms of what is counted as authentic. The authenticity in the new regime will be defined as whatever can pass the automated copyright systems, despite the excessive definitions and exceptions the lawmakers made within the text, making the regulation harder to sustain and enforce as intended. These can only make the act of distribution of the creation longer, as the systems are vulnerable to misjudgment, and hence the creators need to go through formalities to amid false claims. 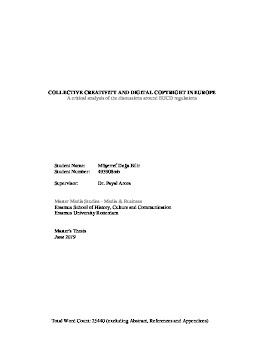