The consumption of foreign Netflix originals by American audiences

The increasing dominance and popularity of streaming video-on-demand platforms, most notably Netflix, has transformed the television and film industry – from disrupting established business models, to affecting the process of production, as well as audience’s attitudes and viewing behaviors (Pardo, 2013). One of these recent developments that remains largely unmapped in academic literature is the unprecedented success of non-English Netflix originals on the American market. Shows such as the German Dark or Spanish Elite are breaking the traditional notion of a one-way flow between the continents and gaining avid viewers among the mainstream US audience, which has historically been thought of as rather resistant to international television imports (Hazelton, 2018; McDonald, 2009; Saleem, 2018). Hence, the present thesis explored this emerging phenomenon by investigating why do American viewers watch foreign Netflix originals and how does cultural proximity and individuals’ cultural capital relate to the consumption of foreign Netflix originals by American audiences. Additionally, the study also investigated the ways in which American viewers perceive the quality of foreign Netflix original and how these perceptions of quality contribute to the shows’ appeal. The exploration was guided by theories related to the transnational appeal of high-end television, the contemporary conceptualizations of quality TV and the theories surrounding the roles of cultural proximity and cultural capital in informing and motivating television viewership (Dunleavy, 2014; Jenner, 2018; La Pastina & Straubhaar, 2005). The study focuses on five popular foreign, non-English Netflix originals produced in four different countries – Dark (Germany), 3% (Brazil), Elite (Spain), Cable Girls (Spain) and The Rain (Denmark). The data was collected by means of semi-structured in-depth qualitative interviews and was analyzed using the method of thematic analysis. The sample of interviewees consisted of American viewers of the selected foreign Netflix originals. Participants were students or recent graduates aged 18-29, recruited from 12 different US universities. The findings of this study were organized around two central thematic sections – motivations related to the narrative, including plot and character-related factors, and motivations related to the viewers and their distinct needs, experiences and viewing positions. The analysis identified that the American viewers were motivated to watch foreign Netflix originals because of a) characteristics related to the plot, b) characteristics related to the character development and c) as a means of escapism. Furthermore, the findings revealed that both cultural proximity, cultural capital and the characteristics attributed by interviewees to quality television, contributed to informing and directing the viewers’ motivation to watch foreign Netflix originals. Finally, the study resulted in new theoretical contributions by attempting to unify the existing theories related to transnational appeal of foreign television and applying them to the context of foreign Netflix originals and their consumption by US viewers. As a result, the study provided new valuable insights by shifting the perspective from creating strategies of transnational appeal to investigating how these are received by audiences, and by focusing on the American viewers which have been largely understudied within this context. 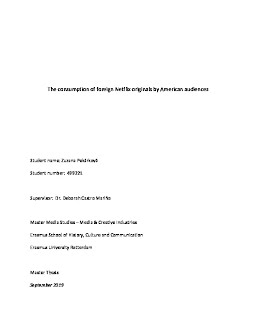